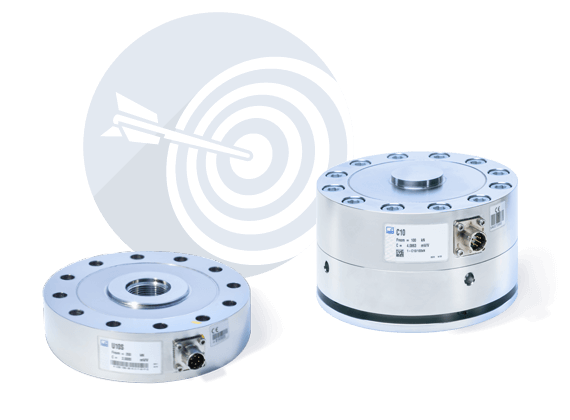 Advantages in the use of high accuracy force transducers

Modern force transducers achieve maximum accuracy levels; temperature effects on the measurement result are extremely small. The so-called TCzero, i.e. the temperature effect on the zero point, of the C10 is maximally 0.075 %/10K. The linearity and relative reversibility errors are also extremely low, depending on the selected nominal (rated) force.

The temperature effect on the zero point (TCzero) is an example of a load-independent error. This measurement deviation has a specific absolute value that is independent of the measured force. Considering such an error relative to the output signal shows that the TCzero is always particularly pronounced when just a small portion of the nominal (rated) force is used. The absolute value is always the same, which, due to the small useful signal, increases the relative portion in this situation.

For example, a typical force transducer using conventional technology should have a nominal force of 100 kN; we assume a TCzero of 0.5 % per 10 Kelvin.

Let's take a look at the same situation when using a C10. The nominal force of 100 kN is also available with the C10 series. However, the TCzero is specified at only 0.075 % per 10 Kelvin.

Thus, the error portion is 75 N and, similar to the above example, this portion remains constant over the entire measuring range. When using the modern C10 at 20 kN, the error portion of the TCzero drops from 2.5 %, achieved with conventional technology, to only 0.375 %.

Besides the TCzero, the linearity error too is related to the full-scale value. Hence, the above considerations can also be transferred to these error portions.

Errors that are relative to the actual value are calculated relative to the currently applied signal. This includes, for instance, the temperature dependency of sensitivity (TCS), creep, or even the tolerance of a calibration that may have been performed.

When evaluating an error, the individual errors are added geometrically, i.e. a significant improvement in measurement accuracy can only be achieved if the largest individual errors are improved. In many cases, TCzero , linearity, and hysteresis are of vital importance. Since these errors – as elaborated above – are relative to the full-scale value, i.e. the output signal at full utilization of the nominal (rated) force, any improvement of these parameters will be particularly effective, also enabling the force transducer to be used in the so-called partial load range, i.e. utilizing only a partial range of the nominal (rated) force

HBM has thoroughly re-engineered the C10, working specifically on full-scale value-related errors. The temperature effect on the force transducers has always been very small, but considerable improvements have been achieved in terms of linearity and hysteresis. Creep tolerance has also been reduced once again.

What are the practical impacts of these benefits?

The figure below argues further in favor of precise force measurement: The force to be measured for quality control purposes is shown on the X-axis. The number of produced parts is indicated on the Y-axis. We get a Gaussian or normal distribution of the produced parts. Green lines, indicating the permissible tolerances, can be found in the diagrams. The measurement uncertainty of the force measurement chain can be seen to the left and right of these limits in red.

Fig. 2: Monitoring a process with a force measurement system with high and low accuracy.

The transducer's measurement accuracy needs to be assessed to enable the process to be evaluated. To implement an OK/NOK evaluation, the components may only be evaluated as OK when they lie within the target range minus the measurement tolerance (visualized by the blue hatched lines in the diagram).

Modern force transducers such as the C10, S2M, S9M, or U10M from HBM achieve high levels of accuracy, well beyond the class standard, above all with regard to the full-scale value-dependent influencing factors on the measurement uncertainty. This enables a measurement chain to be used in a partial load range, and thereby significantly increase tolerance against overloads. This ensures improved reliability. Above all, it is the minimal effect of temperature on the zero point that makes it possible to use the same sensor for various measurement ranges or to increase the percentage of acceptable parts due to the high precision that can be achieved.

C10: Compressive Force Sensor. Maximum Precision.
The C10 compressive force transducer offers outstanding precision and robustness and can be adapted to virtually any measurement task. High output signal.
U10 Force Sensor. Very precise and rugged
Sensor with high bending moment for dynamic and static measurement tasks.
S9M high-precision S-type force sensor with excell
The S9M S-type force transducers can be used for measuring tensile/compressive forces up to 50 kN. Robust (degree of protection: IP68) and extremely precise
S2M High-precision S-type load cell at a low price
Precise, s-shaped S2M force transducer for small forces up to 1 kN. Cost-effective, configurable, and with an overload stop.
Contact us Please send a message and a representative will contact you shortly.
×