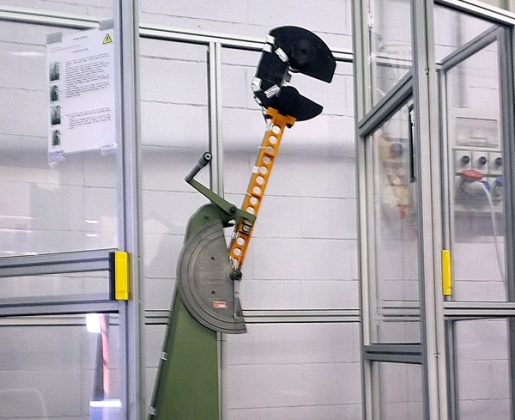 Italian researchers based at the Department of Mechanics in the Politecnico di Milano have selected HBM’s GEN7t (successor GEN7tA) high-speed equipment to improve the reliability and accuracy of data acquisition on Charpy tests.

Charpy impact machines are used in material testing to determine whether a specimen is brittle or ductile. The test is a standardized high strain-rate test to determine the energy absorbed by a material during fracture as a measure of the sample’s toughness.

The test comprises a pendulum swung at a notched sample of material and the energy transferred to the material can be calculated before and after the material has fractured.

To increase test accuracy Politecnico di Milano wanted to develop a digital data acquisition system capable of high sampling rates that could detect the pulse signals developed during impact between the Charpy pendulum and the specimen.

Digitization of the Charpy pendulum – as specified by UNI EN ISO 14556 – requires a strain gauge system fitted on the release mechanism and a sampling system with a bandwidth of at least 250 kHz. After investigating a number of alternative solutions, Politecnico di Milano decided that the only system capable of meeting its needs was HBM’s GEN7t.

The Genesis High-Speed device provides a sampling frequency of 1 MSamples/s and a bandwidth of 250 kHz. Politecnico di Milano found that the ability to interface full-bridge strain gauge circuits, half-bridge and quarter-bridge made the GEN7t particularly suitable for the Charpy pendulum digitalization.

Additional signals can be acquired simultaneously through four channels while the bridges can be easily balanced using pre-installed resistors in the system. HBM’s Perception software provides an intuitive interface that guides the researchers through optimal configuration of all parameters. This greatly reduces the risk of errors caused by incorrect set-up of an experiment.

New information on the behavior of metallic material and its ductile/brittle transition can be obtained by digitizing the Charpy test while the FATT (fracture appearance transition temperature can be more accurately measured.

Innovative use for the Charpy test

The modifications to the equipment’s release mechanism enable the Charpy pendulum to be used innovatively on different tests because the analog instrument – suitable for only one type of test – has been transformed into a more versatile device with greater potential for scientific research.

Shock, Vibration and Impact Testing
Genesis High Speed DAQ system provides absolute data security, plus an extremely high sample rate of up to 100 MS/s for shock, vibration and impact tests.
Contact us Please send a message and a representative will contact you shortly.
×