Composites or fiber-reinforced composites consist of at least two macroscopically differentiable materials that are combined with the basic aim of improving the material properties. A fiber structure is usually embedded in a resin (matrix material) and then cured.

To achieve this, fibers and fiber bundles are processed into a textile or fabric. Most methods to manufacture fabrics from fibers have originated from the textile industry, hence, most of the terminology used in this field is also used in the context of processing reinforcing fibers into textiles. The fibers determine the composite’s strength and stiffness. A material into which aligned fibers have been incorporated can be much stronger in the fiber direction than the same material without fibers. The increase in stiffness is less pronounced when force is exerted perpendicular to the orientation of the fibers. The strength in this direction is lower since the fibers act as concentrators of stress. In practice, fibers aligned in different directions are often incorporated.

There are many possible designs*: 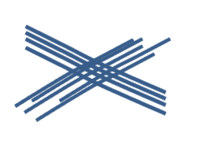 The graph below shows the fiber’s contribution to a composite’s strength:

*Nanocomposites use very small fibers in the nanometer range as the reinforcing material.

Commonly used fibers include, for instance:

What Are the Fields of Application of Composites?

Why Are Composites Used?

Why Is It Necessary to Perform Strain Measurements on Composites?

The characterization of composite materials and structures is extremely important to ensure their durability during use. Different tests are performed to achieve this. It is essential to measure component deformation. Strain in the material is a critical factor determining damage effect and durability.

Previous calculation approaches for these materials can only be applied to specific cases (e.g. Tsai Wu). There is no universal calculation method and no standard for components similar to the FKM guideline for metallic components. Since these are laminate structures, this also applies for the use of quasi-isotropic laminates. Many methods for performing calculations on composite materials have already been developed.

Another challenge is to convert the strain signal into mechanical stress.

Which Strain Gauges Does HBM Recommend for Measurements on Composites?

It depends on the test case:

We recommend using our pre-wired Y strain gauges for composites that show a critical response to typical soldering temperatures.

Some strain gauges for composite materials are available from stock.

A strain gauge integrates the strain below the surface, and an average strain is measured.

The right measuring grid length depends on the testing objective. Grid lengths of 6 mm and 10 mm are popular solutions for strain measurements on composites.

Local strain peaks can occur due to material inhomogeneities. In this case, strain gauge chains can be used to determine the strain gradient.

Often, the stress peaks between the fibers are a multiple of the average strain. As a consequence, the strain gauge may be overloaded at some points, its maximum elongation being reached or exceeded, although the amplifier displays a far smaller strain. Thus, there is a risk of the SG being overloaded (permanently damaged) at individual points or of failure of the whole installation. This problem can be eliminated by inserting a thin Polyimide film between the strain gauge and the workpiece. The film is glued between the component and the strain gauge and performs preliminary integration, i.e., it "distributes" the stress peaks under the strain gauge measuring grid. Because of the resulting thicker layers, the film should only be used if a high strain is expected.

The voltage at every strain gauge is converted into heat. Poorly conducting materials such as fiber composites show a heating-up of the sensor and component on the surface. To ensure a stable measurement, the heat flow Q must correspond to the applied power P.

The graphic below shows the heating process of a 350-ohm strain gauge measuring grid on a slowly cooling material:

Make sure to start measuring on composites only after a certain heat-up phase, when the measurement system has reached a stable state.

The following values can be used for quarter bridge applications with an excitation voltage of 5 V: 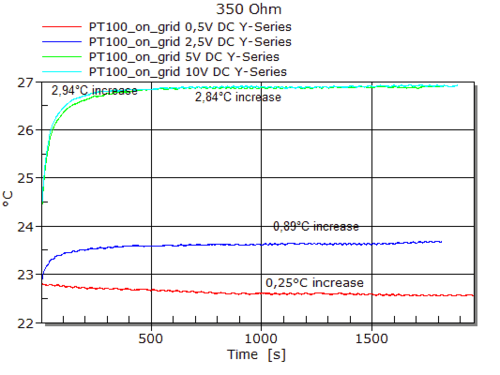 It should be noted, however, that, due to manufacturing tolerances (fiber winding, layer production, fiber orientation, manufacturing method (automated or manual)), the material properties could differ too, and thus only an approximate temperature response matching can possibly be achieved, depending on the fiber composite.

It is generally recommended to use strain gauges with code number 6 for measurements on composites (α = 0.5 · 10-6/K). This may vary in some cases:

Please note: The lower layer fibers must not be damaged by excessively deep roughening!

Selecting the Adhesive and Bonding

All cold-curing adhesives from HBM's range of products can be used to install strain gauges.

With directed fibers, it is essential to correctly align the strain gauge owing to the orthotropic material behavior:

Make sure to exactly align the strain gauge on the material: