The right communication for the industrial sector

Interfaces in the sector of system and process control include those that serve to exchange information in the form of physical (e.g. electrical voltage) or logical (data) parameters. Transmission can be either analog or digital. There are various types of interface depending on the level at which communication takes place. 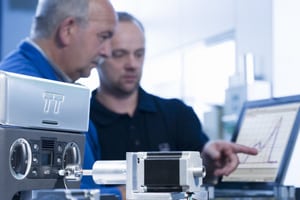 Each of these interfaces are standardized in that they are described by a set of rules. In addition to the description of which functions are available and how they are used, semantics are used to describe the individual functions. Standardized interfaces offer the advantage that components or modules which support the same interface can be exchanged, i.e. they are compatible with each other.

Fieldbuses in an automation environment

The increasing complexity of a machine of system means that the cabling requirements also increase when using parallel wiring, due to the large number of sensor and control elements involved. This necessitates far more work with regards to project planning, installation, commissioning and maintenance. Parallel field wiring is therefore a significant cost and time factor in automation technology.

In comparison, serial networking of components at field level using fieldbus systems is far more cost-effective. The fieldbus connects all levels, from the field level to the process control level, with just one bus cable. The transmission medium of the fieldbus networks all components, irrespective of the type of automation device used. These devices can be distributed anywhere in the field area and are connected decentrally on site. This means that a powerful communication network is available for contemporary automation concepts.

Various factors play a role in the selection of the fieldbus system to be used. As specific requirements are particularly well met by different types of systems, the different fieldbuses achieve high market shares in their specific branches, but can hardly be found, if at all, in other industry sectors.

This means for instance, that only specific bus systems that permit the exchange of individual components, during ongoing operation, of the other bus nodes (hot swapping) can be used in numerous process engineering systems. If there are numerous drives or axes in a machine or system, one criterion may be the synchronization of the individual nodes. The transmission speed or the deterministic behavior of the data exchange are then of significance in this case. Considerable value is placed on the installation characteristics during the production of series machines, so that they can be rapidly and efficiently produced.

If Ethernet is to be used in the automation technology instead of a fieldbus system, then real-time capability is of particular interest. The term real-time is essentially a question of definition. Real-time with regards to the synchronization of drives can be measured in micro-seconds, while in contrast reaction times measured in seconds are sufficient for process engineering applications. The real-time behavior is not determined here by the actual transmission rate but results from other factors, such as the net data throughput and the protocol being used.

The following diagram shows the worldwide distribution of interfaces (number of newly installed nodes in 2006):

If you compare various fieldbus systems and Ethernet with regards to the efficiency of data transmission, Ethernet comes out with a lesser value. This is due to the CSMA/CD method which must work with a large minimum telegram length because of the essential, but secure, collision detection method (Collision Detected). However, this shortcoming is compensated for by the higher transmission speeds of up to 100 Mbit/s. But such high transmission speeds can only be realized with a point to point connection between the devices, which is only available to Ethernet and the Interbus system. The maximum spacing between the nodes changes in accordance with the increasing cycle rates in systems with variable transmission rates such as Profibus or CAN. Therefore, the higher the transmission speed, the shorter the cable length. This can, in unfavorable cases, mean that the communication distance that can be laid may only be a few meters long, something that is not always a disadvantage in closed systems or system components. If, however, system components or machine modules need to be connected, the distances available must be taken into account.

Due to the various technical options for individual bus systems, it may be possible that a system division occurs in the systems, i.e. the operator has installed various types of a bus system or different bus systems in parallel. The operator should not just be guided by the technological advantages here, but should also implement a detailed cost/benefit analysis, as the investments involved in the handling, training and maintenance of the individual systems represent a significant cost factor. Simple integration and the interoperability of the components used is just as important as their connection to sub/superordinate network structures. Connection can be implemented, e.g. using gateways (protocol converters) which enable transitions between the bus systems in use.

Ethernet already plays a decisive role today in superimposed structures because components used in the office sector, such as hubs, switches and routers, can also be used for the transmission and processing of production data. If the machines and systems are connected to the Internet, the operator can achieve a potentially high level of savings with the use of remote diagnostics. However, useful vertical integration requires a universal representation of process data and system states. Another requirement is project planning and parameterization of the fieldbus via the Internet.

Even if worldwide access to machines and systems is often still not seen as an important decision criterion, machine and system designers place great significance on the diagnostic behavior of the bus system being used. As the electronics used in automation systems are mature and powerful products, 85% of all system failures are due to installation errors, according to an ZVEI study. These are often "progressive" errors that often only appear after months or even years. Significant savings potential is also possible with regards to system availability and the resulting minimization of standstill times. The requirement is therefore for detailed bus diagnostics which enable the rapid detection of errors, thereby reducing not only the downtimes but also personnel costs for repairs.

Transmission security is another factor which must be taken into account when selecting the most suitable fieldbus system, especially due to the constantly increasing use of intelligent devices in rough industrial environments. It must be ensured that individual errors (e.g. due to EMC influences) can also be clearly recognized. Rapid error detection is good, preventing downtimes is better. Fiber-optic cable technology is therefore used for error prevention. The different bus systems in use also provide various technical options.

Industrial Ethernet is the generic term for all efforts undertaken to apply an Ethernet standard to the networking of devices used in industrial production. Switches, hubs and media converters adapted to industrial environmental conditions are being produced on the basis of the Industrial Ethernet standard. Requirements include in particular the attachment to DIN rails, a direct current supply (DC 24V), an extended operating temperature range, an increased degree of protection, vibration resistance and, in many cases, special measures for failsafe operation.

As network connections in the industrial environment are frequently implemented in series from machine to machine, Industrial Ethernet networks are often set up in a ring. This can limit a malfunction to maximum one switch. If a line fails, the network can continue to operate as a whole. The network disconnection in the ring is implemented either using a rapid spanning tree protocol or a non-standardized protocol that enable faster reaction times. Potential-free signal contacts permit rapid error detection. 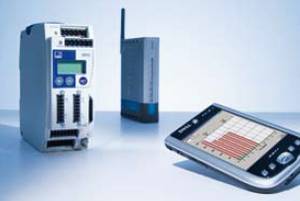 Communication in industrial applications is of great importance at all levels. Despite numerous efforts, it has not yet been possible to define a uniform standard that would make it possible to operate devices with different systems together. Because of the higher bandwidths, Industrial Ethernet is replacing fieldbus systems in individual applications despite the significantly higher costs.

At HBM, being able to offer as many of the current market standards as possible is a main priority during development. Developmental efforts range from the hardware interfaces of the measuring instruments, to the use of open software architectures and support of technologies such as FDT, right up to the inclusion of devices used in process monitoring in current fieldbus systems. HBM is focusing here mainly on Firewire, Profinet and EtherCat. The slightly higher costs are more than compensated for by the advantages with regards to process speed, increased data volumes, global networkability and remote diagnosis.