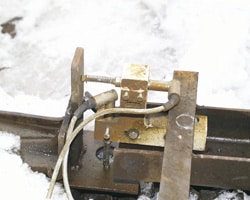 Inductive transducers can be used in even the severest conditions, such as on this stretch of track at Brixental in Austria.

Flexibility on the site

The WA10L was chosen for a measuring displacement of ±5mm , in the 0.5-10V option which had only recently become available (for details see Hotline, issue 2/2001, page 32). The necessary electronics were in the form of a module inserted in the cable, a feature known as cable electronics.

The fact that the degree of protection is IP 67 was an important consideration for the whole measuring system. The decision whether to install the transducer cores so that they were in contact or firmly fixed could only be taken on site, so externally mounted coiled springs were used in order to provide partial spring-loaded support.

The MGCplus DAQ system was used to capture and process data from over 850 measurement channels. The sampling rate on each channel was 1,200 Hz, which meant measuring and storing 850 channels, without phase shift, 1,200 times per second per channel.

The data was then analyzed with the aid of HBM’s catman®‚ software. So that inexpensive, voltage-input ML 801/ AP801 eight-channel plug-in modules could be used, the signals from the passive inductive displacement transducers had to be converted to 0.5-10VDC signals corresponding to 0 to 10mm. The innovative WA cable electronics made this a simple matter.

Even though the transducers and electronics were exposed to extremely harsh environmental conditions such as sun, rain, ice and snow, measurement continued for over six months without any sign of deterioration. Brown streaks appearing on the displacement transducers due to the effects of abrasion and airborne rust were very easily removed. Austrian Railways have already indicated their intention to use HBM measurement technology in further research projects in the field of wheels on rails..