Force transducers have reached a high technical standard in recent years. Transducers achieve part of their high accuracy due to improved possibilities for calibration. In very many cases a force transducer, unlike load cells, for example, cannot be calibrated in the application. To achieve good and reliable measurement results, it is important to come as close as possible to the installation situation of calibration in practical usage and only to allow deviations within the valid technical specifications.

a. Oblique application of force

In this example the force to be measured, Fin, is applied to the transducer at an angle denoted by α. The force vector of the applied force is then distributed into two components Fz and Fx. Only the force in the Z direction, which is smaller than the applied force, is measured at the sensor.

In consideration of the formula:

the measurement result is therefore too small by a factor of cos(α).

Moreover, in these cases a lateral force is exerted, which can be calculated with

The measurement error when force is applied at angles of up to five degrees is described in the table below:

By comparison: The largest individual error in modern force transducers (S9M, S2M) is 0.02 %. 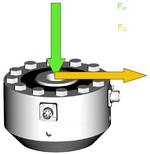 Lateral forces are forces that are applied perpendicular to the measurement direction of the transducer. German standard VDI/VDE2638 refers to a force that acts on a point in the application of the load.

These lateral forces are generated, for example, due to the intrinsic weight of attachments or because a load is applied at an angle. In general a lateral force always induces a bending moment, as the lateral force seldom acts at the height of strain gauge (SG) installations. Depending on the transverse sensitivity of the transducer, an additional error is generated. This error is well under 1 % of the force in the measurement direction (Fz) in most transducers if the lateral force is 10 % of Fz. 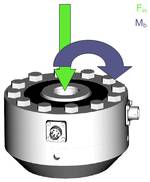 Major angle errors in the application of force can destroy the transducer. A bending moment often overlays the actual force to be measured in practice.

In this case the torque (which rotates clockwise in this sketch) relieves load on the transducer on the left side and loads it on the right side. Rotation-symmetrical force transducers (C2, U2B or U10M) are especially insensitive to bending moments because they compensate for bending moments by using multiple measuring points distributed over the circumference. Force transducers U10M and U10S have a bending moment alignment that reduces the influence of the bending moment to 0.01 %. This feature makes use of the fact that when the individual measuring points are combined, the result generated is always the mean value.

Bear in mind also that in many cases bending moments bring with them a lateral force as well which places additional load on the transducer. Note also the sketches below. 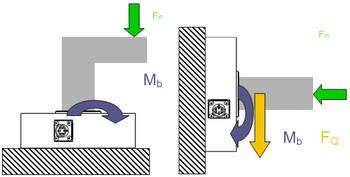 The bending moment is generated on the left side because the load is applied eccentrically In this case there is no lateral force.

A bending moment is generated on the left side because the intrinsic weight of the load application produces a lever. The distance from the center of gravity to the force transducer is the length of the lever. The weight is transformed into a force in this simple case. The moment is obtained by multiplying force times the lever arm. In addition, the weight force acts on the transducer as a lateral force. Both parasitic influences must be taken into consideration. 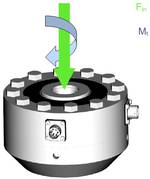 Force transducers designed for compressive and tensile loading are supplied with internal threads (S9, S2, U10) or threaded bolts (U15, Z4, U2B). During installation of the transducer, it is important that these screwed connections are locked in place with a suitable torque. The maximum torque is frequently exceeded during mounting. Please note: Lock the screw connections in place so that no torque is applied through the transducer. The maximum torque must be kept in mind as well, since the transducer can be permanently destroyed if the limit value is exceeded.

During operation the torque is largely compensated for by the geometry of the transducer body and the installation location of the SG.

d. Interaction of all moments, torques and lateral force

The maximum load limits must always be understood as indicating that the transducer, when loaded with the nominal (rated) force, can also be loaded with one of the parasitic influences. If several effects act simultaneously on the force transducer, then the following applies: 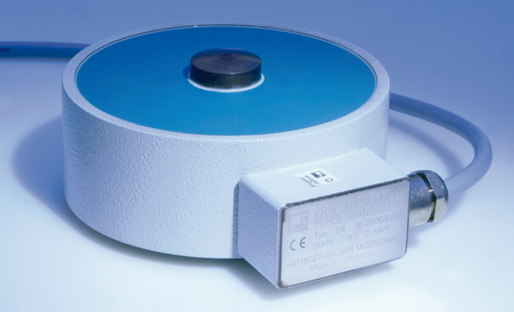 Transducers designed so they are only able to record forces in the pressure direction are generally equipped with a convex fitting for application of the load.

The application of force on the load button can be implemented with the load application aids that are available for many models. These include for example thrust pieces as shown in the sketch below.

If a force transducer is installed without a thrust piece of this type, the following requirements must be met for the component that comes in contact with the convex force application area:

In any case the structural element on which the bottom of the transducer is mounted must be designed so that forces are received with only slight deformation. Sufficient rigidity should be ensured for this purpose.

It is also important for the surface to be even. The maximum tolerable unevenness is 0.005 mm. An even substrate structure ensures that the force transducer will be deformed in the way that is required to achieve the manufacturer's full measurement accuracy.

The substrate structure should be resistant to deformation and must have a larger diameter than the force transducer. A substructure that results in significant deformation, too small a surface or unevenness in the application of force will lead to states of deformation that were not taken into consideration in the design of the transducer. Technical data related to sensitivity, linearity and hysteresis may therefore change.

There are two different ways to do this:

a.    A bolted connection with application of force that is greater than the largest operating force

b.    Mounting with suitable torque

Note that the torque required for mounting must never be applied through the transducer. If it is, the transducer may be destroyed. For force transducers with external thread: The component to be connected must at least be fixed in place by a locknut. This requirement is eliminated for purely static force measurements. The torques are specified in the operating manuals for the force transducers. ; The Z4A (right) is only locked on the internal thread. Locking with a nut is always required for the external thread of the U2B (left) HBM offers knuckle eyes for almost all transducers that are suitable for tensile and compressive forces. If force transducers are mounted using at least one knuckle eye, torsional moments are not applied to the transducer. If two knuckle eyes are used, bending moments and forces must not be applied to the force transducer at an angle.   Use of two knuckle eyes for calibration of a U10M with a maximum capacity of 500 kN Knuckle eyes are normally not suitable for measuring dynamic forces because bearing play increases over time, which can lead to measurement errors. Furthermore, the frequency range within which knuckle eyes can be used is limited to about 10 Hz. For dynamic requirements we therefore recommend the use of pliable elements to apply forces."

Force Sensors + Load Cells [N]
HBM Force Sensors and Force Transducers with strain gauge or piezo technology measure static and dynamic tensile and compressive loads.
Electrical Connection of Force Transducers
In this article from HBM you learn what you should keep in mind for the successful electrical connection of force transducers.
Adjustment of Electronics for Force Measurements
Read the technical article to find out how to correctly adjust your electronics to match your force sensor and ensure your measurement is reliable.
Force Glossary
The most important terms on force measurement, sensors, and standards explained - practical, free, and easy to use!
Contact us Please send a message and a representative will contact you shortly.
×