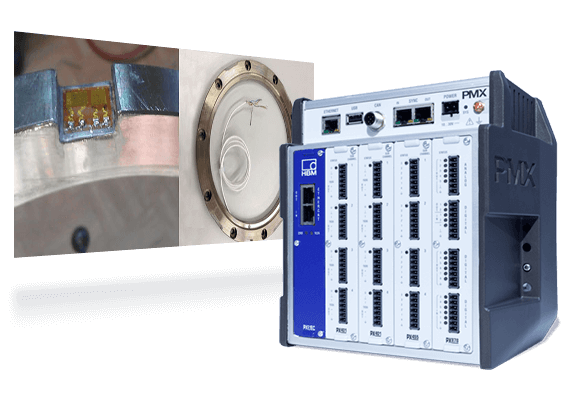 Component parts in rolling mills are subjected to particularly high stress. For example, high forces act on all bearings by which the rollers are axially held in position. If these bearings wear out prematurely, product quality decreases and the bearings need to be exchanged at great expense. Since this happened several times at a manufacturer of aluminum products, SKF, the worldwide leader in bearing technology, decided to use HBM's PMX amplifier platform to look for the cause.

SKF is a leading manufacturer in the field of bearing technology, with the company's products being used in many branches of industry. A manufacturer of aluminum products, for example, uses cylindrical roller bearings from SKF as so-called axial bearings in a rolling mill to ensure that  rollers are held in position. Considerable forces act on the individual components here. "Over the past years, we had to repeatedly replace the cylindrical roller bearings long before the end of their regular service life, since they already showed signs of considerable wear," says Rupert Motschenbacher, who is the contact for the manufacturer of aluminum products at SKF. "Therefore, we agreed with the customer to get to the bottom of the problem." After all, wear is a problem already before the bearings need to be replaced: Even a slight shifting of the roller as a result of bearing clearance negatively affects product quality.

Tracking down the error

For this reason, Motschenbacher decided to seek the advice of the in-house experts for these topics, the Solution Factory located at the SKF site in Schweinfurt. Uwe Säger, responsible for the project, explains the course of action: "We wanted to find out whether the forces resulted in an overloading of the bearing only during specific production steps or on a permanent basis." The forces acting on the bearing were to be measured by determining the degree of deformation of a measuring ring. "We were looking for a cost-efficient, external solution, because we had no sensors ourselves," Säger explains. SKF decided to use type XY31 3/120 strain gauges combined with the PMX amplifier platform from HBM. Säger says, "We developed and commissioned a test setup in co-operation with the experts from HBM." It included a measuring ring on which four strain gauges were installed.

Their advantage: They are sufficiently small for the 12.5 mm wide measuring ring which has been calibrated together with the PMX system. Non-linearities resulting from the measuring body geometry could be compensated for using the maths functions provided by PMX and thus accuracy could be significantly increased. No additional software was required thanks to the PMX system's integrated web server. The calibrated measuring ring was eventually fitted into the chock between the axial bearing and the cover unit. The modified chocks were then installed, together with the work rollers, in the rolling mill at the SKF customer's premises to measure the actually occurring axial forces.

The rolling mill was tested in different production processes. The signals from the two measuring rings were acquired by the PMX amplifier and, via its flexibly scalable analog outputs, transmitted as 0-10 V signals to the SKF measurement system. "Thanks to data acquisition in the amplifier we get a conditioned signal in a form and quality we can directly process," Säger explains. A sampling rate of up to 19,200 measured values/s and 24 bit resolution ensure maximum precision and high transmission speed. This enables even very small signal variations to be acquired. Furthermore, the PMX amplifier, through use of carrier frequency technology, ensures interference-proof data acquisition in the tough environment of a rolling mill, i.e. without interference of electromagnetic fields.

The best way to optimize your production

To be able to draw conclusions, SKF combined this axial force load signal with measurement data on the operating conditions (rolling force, system speed, bending force of the roller) directly from the rolling mill's process control system as well as with values on the axial bearing shift determined using SKF sensors. Säger says: "Merging these values showed that the forces in some production processes are higher than in others and can even result in an overloading of the axial bearings. Based on these insights we are now working, together with our customer, on a solution to avoid overloading in the future and thus significantly extend the axial bearings' service life."

PMX - Modular Measuring Amplifier System for the I
The multi channel data acquisition system measures and controls in real-time and is ideal for production processes and quality assurance.
Strain Gauges
HBM strain gauges for all strain measurement applications: Experimental stress analysis, durability testing, monitoring, and transducer manufacturing.
Contact us Please send a message and a representative will contact you shortly.
×