HBM technology is especially user-friendly in practical applications: Before starting up, the thermocouples are conveniently calibrated by the LabVIEW* software via an the QuantumX system's open interface. After, the thermo-transducers are distributed over the motor block, cylinder head and exhaust system and then applied at different depths of the material. The test bench runs through several operating points during the test to simulate different types of loading encountered while driving. The QuantumX amplifier records the temperatures and forwards the information to the test bench system via scalable outputs in real time. 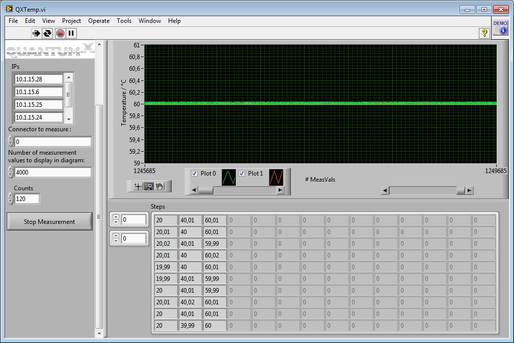 "Our system is integrated into the test stand measuring system through the HBM QuatumX CANbus Gateway. We have instant access to all temperature data and are able to work with the data," explains Kanzenbach. 300 temperature values per second can be recorded and transferred for each channel at a bandwidth of up to 15 Hz with 24-bit resolution, immune from interference. The thermal calibration of the measuring chain based on only two measurement points allows for a further significant improvement in measurement accuracy. This ensures that even very small dynamic temperature changes will be recorded.

Then the data is combined on the test bench with other engine values such as speed and torque. For very high speeds up to 30,000 rpm, an inertia-optimized torque measurement system is used. The results make it possible to calculate temperature distribution in the engine at different engine loading levels. "With this high-precision measurement of temperatures, engineers can then improve engine efficiency still further," concludes Kanzenbach.

* LabVIEW is a registered trademark of National Instruments Corporation.

"We had narrowed down our selection process to four measuring amplifier systems. Then QuantumX from HBM won us over in the practical test, especially with its extremely low measurement uncertainty."

QuantumX MX1609B Data Acquisition Modules for Thermocouples
QuantumX MX1609B thermocouple modules offer maximum precision for 16 channels – making them ideal for use in research and development.
QuantumX MX471 CAN / CAN FD
This module allows the simultaneous integration of up to four CAN networks into the QuantumX DAQ system and can be expanded as required.

Headquartered in Cologne, Germany, Toyota Motorsport helped develop and test engines, chassis and other parts of racing cars for the Panasonic Toyota Racing Formula One team. After Toyota left the race scene in 2009, the company became a test and development center, specializing in high-technology. In 2012, it returned to international motor sports, entering a hybrid vehicle in the FIA World Endurance Championship, including the 24 Hours of Le Mans.

Toyota Motorsport has numerous testing methods—including a wind tunnel—for different parts of vehicles. It uses the tests not just for internal development projects but also offers them to other providers in motor sports and the automotive sector. To further expand its range of offerings to outside organizations, the company decided in 2013 to set up a new combustion engine test bench for multi-point temperature measurements.

"This will allow us to simulate temperature distribution in the engine. With that data, engineers will then be able to optimize the cooling circuit, for example, and boost the overall efficiency of the engine," explained Bruno Kanzenbach, Senior Engineer at Toyota Motorsport. "We have a lot of know-how in test benches, but for measurement technology, we prefer to rely on the expertise of specialized providers."

Kanzenbach works in the chassis department and calibration laboratory, but he was given the responsibility of choosing the measurement technology because of his broad experience in metrology. He started by defining the requirements, which included the capability to provide data from at least 100 measuring points, synchronously and in real time, directly to the test bench. The measurement technology also needed to represent even the slightest temperature variations precisely.

"We had narrowed down our selection process to four measuring amplifier systems. Then the HBM QuantumX amplifier won us over in the practical test, especially with its extremely low measurement uncertainty," said Kanzenbach.

"There is a risk with cable clamps that the measurement will be distorted by the heat emitted from the engine into the room. That problem disappears with this connector solution," explained Kanzenbach. "This also saves us a lot of time during setup. An engine test bench is a complex structure because, in principle, it simulates a complete vehicle including the electronics, cooling circuit and exhaust. So it's quite practical if the more than 100 measuring points can be connected to the measuring amplifier simply by connector, as with the QuantumX amplifier. Then there's no need for additional cabling, which can be very extensive." Connectors also make it easy to convert the system quickly for tests on different engines.