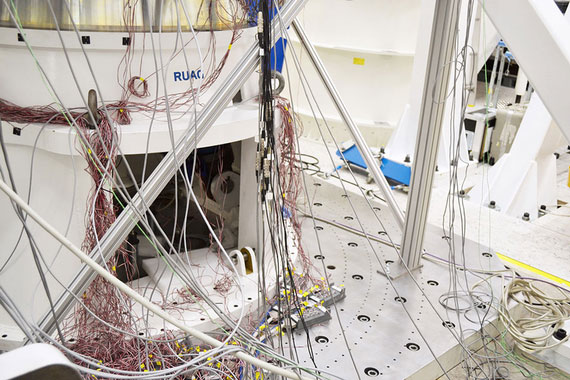 RUAG Space is Europe's largest independent supplier of space products to the industry. At the site in Linköping, Sweden, a team of approximately 100 people are involved in the development and construction of launcher structures and separation systems for satellites and rockets. The lab in Linköping uses the data acquisition system MGCplus from HBM as the back bone of its testing, particularly in larger rigs where many channels are needed.

RUAG's products have been featured in most major launchers for satellites in Europe; Ariane, Atlas and Delta, to name a few. The company's specialty - adapter with separation system between the rocket and the satellite - is critical for a launch to succeed. The separation system keeps the satellite onto the adapter until it is time to unleash it.

The adapter's task is to get the satellite to fit the rocket. The adapter, which is often conical, must ensure that the firing rocket and satellite are kept together during launch, although it is exposed to enormous forces. It must also make sure that they are separated at exactly the right moment.

Therefore, the products are rigorously tested. One of the test engineers is Peter Svensson.

"I believe that RUAG is among the best in Sweden at static load testing. With a few exceptions, all our tests are conducted on behalf of our own operation. The equipment that we have developed and tested has so far carried out almost 600 separations in space."

When Peter does not work at home in the lab with design and testing, he takes part in launches all over the world, in places such as Kazakhstan and Florida. In the field, one of his tasks is to fasten the important separation system located between the rocket and the satellite at launch, which makes the separation from the rocket possible.

At our visit of the lab in Linköping, a giant test rig for the weather satellite Meteosat Third Generation (MTG) has been set up. MTG is a program within European Space Agency (ESA) with six satellites, aiming to be launched in 2018.

RUAG in Linköping has used MGC Plus for more than ten years and they have a long relationship with HBM.

”User friendliness of both system and software is of great importance to us, since it can be a long time between large tests. MGC Plus suits us since we need many channels simultaneously and we want to be able to measure at high speed,”

RUAG Space is Europe's largest independent supplier of space products to the industry. RUAG Space employs around 1,100 people at its eight sites in Switzerland, Sweden, Finland and Austria.

”It is great as a universal unit as it can be adapted to different quantities and temperature, with different connections. We like the flexibility. In addition, it is helpful that both of our measurement systems use the same software: Catman.”

Everywhere at the Linköping site it is clear that high requirements are put on the equipment that is to be used in space. As an example, aluminum included in RUAG’s products is of the highest standard, so called ”space quality”. Also the mechanical engineering is carried out with the greatest precision, by staff wearing white lab coats. It is not a coincident that "rocket science" has taken the wider meaning of something that is intellectually and scientifically challenging ...

MGCplus: The Allrounder in Data Acquisition
The MGCplus is the ultimate, scalable and configurable data acquisition system for laboratory and test stand use. It acquires data on many parameters.
QuantumX: Universal and distributable DAQ
The QuantumX data acquisition system (DAQ) is the perfect tool for all of your test and measurement needs. HBM are suppliers of this system.