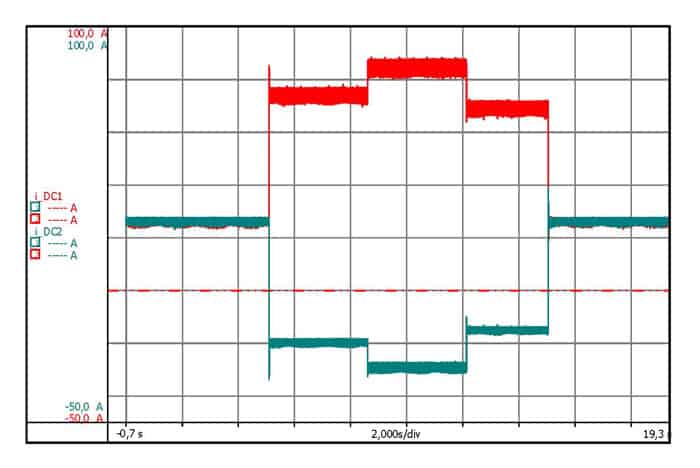 In this article the topology of the dual two-level inverter (DTLI) is first presented in depth. This is followed by a presentation of the acquisition of mechanical and electrical variables with the GEN3i data acquisition system and calculation of the real-time power values.

The topology of the dual two-level inverter consists of two individual two-level inverters. The winding strands of the electrical machine are connected between the two inverters. The electrical machine is thus supplied by six phase voltages. Figure 1 shows the topology of the DTLI with separate DC links. The two inverters are supplied by two DC voltage sources, which are also separate.

Some typical advantages of this DTLI topology include improved failsafe performance, reduced DC link voltage (with the same power requirement for the machine) and also the higher number of voltage levels compared to the single two-level inverter application [1].

At the same time the topology makes it possible to distribute the electrical power absorbed or given off by the machine to the two inverters or the energy supplies connected to them. Figure 2 shows the possible directions of energy flow within the system. Those directions lie not only between the inverters and the electrical machines, but also between the two inverters themselves. That means it is also possible to exchange energy between the two energy supplies via the machine winding.

Metrological acquisition and analysis of electrical and mechanical quantities present in the system requires a large number of measuring points.

In addition to mechanical quantities such as rotational speed, torque and angle of rotation, electrical measured values of the relevant phase voltages/currents, DC link voltage and currents are required to evaluate dynamic and stationary operating behavior.

Figure 3 shows in diagram format measurement acquisition of system quantities which are sent to the GEN3i data recorder.

Figure 4 shows the machine being tested with the two-sided connection of the windings. Also visible are the torque transducer, current transformer and the measurement tap for the phase voltages. Figure 5 shows one of the two lithium battery banks for supplying the inverters. Figure 7 shows the input channels of the GEN3i with the measuring shunts for the current measurement and the artificial stars.

The measured raw data can be used to determine the individual system powers [2][3]. The phase quantities are used to calculate the instantaneous powers of the inverters on the output side:

Due to the direction of the counting arrow for the second inverter, negative phase voltages contribute to the positive power output:

The effective powers are determined by averaging over the fundamental oscillation period T of the phase current:

The effective power of the two inverters on the input side is determined in a similar manner:

The instantaneous power of the electrical machine can be represented as the difference in voltage between the respective phase voltages times the phase current:

Or also as the sum of the two inverter powers:

The mechanical power on the machine shaft is calculated taking into consideration the torque M and the rotational speed n:

Using the efficiency of the inverter, the quantities on the alternating voltage side can be converted to the DC voltage side:

If the efficiency is known and the battery voltage is constant, the relevant battery current can be determined as follows:

The two IGBT inverters of the DTLI are synchronized, each at a switching frequency of 8 kHz. The two inverters are supplied by lithium battery banks with a nominal (rated) voltage of 210 V each. Two series of tests for determining the operating behavior of the DTLI and the electrical machine are described below as examples.

During the measurement the dynamometer is operated with speed control at a constant 750 rpm. The machine being tested is first supplied symmetrically (PAC,1 = PAC,2) by the dual two-level inverter, then asymmetrically (PAC,1 ≠ PAC,2). The torque from the motor is 120 Nm. Figure 8 shows the system powers P calculated by the GEN3i. The input and output powers of the inverters as well as the electrical and mechanical total output are shown. You can see for example that the variation in energy distribution affects only the powers of the first two inverters, not the engine power that is delivered.

Starting from a symmetrical supply of power with the same machine setpoint as in (A), the energy exchange begins between the two inverters and the lithium batteries. A required load current of 20 A initially and then 30 A and 15 A is assigned for battery 2 (fig. 10). Figure 9 shows the system powers P calculated by the GEN3i. The symmetrical supply of power to the two inverters at the starting point is replaced by the exchange of energy at time t = approx. 4.3 s. Inverter 1 then returns the energy required by the electrical machine as well as the energy required to charge battery 2.

The effective power curves in Figure 11 show the input and output power of inverter 1 as well as the mechanical power and a comparison of the two calculation methods real-time and post-processing for the measurement described in section 4 (A). Both methods return the same results.

Figure 12 shows an extract from the formula sheet that is used in Perception. The calculations of the two energy storage devices and the output power of inverter 1 are shown here as representative values.

Implementation of the power calculation in real time is illustrated in Figure 13.

The input and output effective power of inverter 1 are also shown here as representative values. Note there are some differences in syntax between the post-processing and real-time calculation.

Electrical Machine & Powertrain Testing
HBM eDrive testing consists of two components – the power analyzer and DAQ system which are used to test electrical drives.
Understanding Source of Noise of Electric Engines
Register here for this free webinar and discover how the electrifications is changing the way we experience and measure electric vehicle engine noises.
Getting the Back-Emf of a PM electrical machine
The Back EMF needs to be measured first when characterizing a PM motor. The article decribes how to do this using GEN3i with just turning the machine´s shaft manually.
Accelerated Efficiency and Loss Mapping of AC Motors
This article describes an accelerated process to create motor maps in a few minutes only and then describes the analyses of the data to create efficiency a
Calculating space vector quantities and the air-gap momen
Asynchronous motors are often used in drives. In this article you learn more about the calculation of space vectors and the air-gap moment.
Power measurement at a PWM inverter
The development of electric drives requires power measurements at inverters. This article describes the calculation of pwer quantities using Perception sof
Calculating Power Quantities with Perception
Learn how to use the Perception formula database to compute power quantities (incl download of formulas as Perception workbench).