So how does a … force transducer actually work? 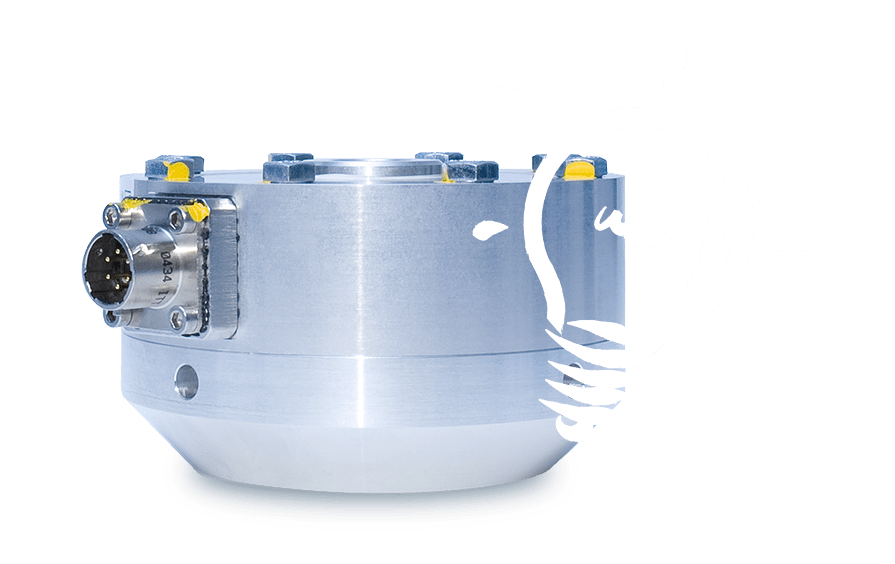 Let us digress briefly to take a closer look at strain gauges: They are electrical conductors firmly attached to a film in a meandering pattern. When this film is pulled, it – and the conductors – get longer. When it is contracted, it gets shorter. This results in a change in resistance in the electrical conductors, and on this basis we can determine the strain, for resistance grows when there is strain and diminishes when there is contraction.

To produce a force transducer, in addition to strain gauges you also require a spring element – made of steel, for example. The strain gauge – electrical conductors on film, you recall – is bonded securely to this spring element.

As the simplest form of spring element, we can picture a steel cylinder that is either elongated or contracted under the impact of force. We will disregard further forces, such as those coming from the side, in this paper. The force acting on the steel produces mechanical stress in the material, leading to strain. And strain can also mean contraction, because from a physics point of view, this is negative strain.

"When it is pulled, things don't just get longer, they also get thinner. Poisson's ratio indicates the ratio of transverse to axial strain. We can compare this with a rubber band, which becomes noticeably thinner when it is stretched." – Thomas Kleckers

If the steel cylinder is contracted it gets shorter, but also thicker. When it is pulled lengthwise, it also gets a bit thinner. How thick or thin it gets depends on the basic mass of the steel. It's obvious that if the steel body is very bulky, higher forces are needed to contract it to a given dimension than if it were very thin. This fact is helpful when building force transducers for different purposes: smaller transducers are used for lower nominal forces, larger transducers for higher nominal forces. Here, the nominal force denotes the intended maximum load of the sensor.

But let's return to the strain gauge. A force transducer generally contains four SGs, connected in a "ring" in a Wheatstone bridge circuit, which we are not going to explain in any more detail here (learn more about it in the reference book 'An Introduction to Stress Analysis and Transducer Design using Strain Gauges'). What's important is that the SGs are firmly attached to the steel of the transducer, and therefore undergo the same deformations it does. When the steel is deformed, the resistance of the strain gauge changes, as mentioned above. So, the output signal from the bridge circuit provides information on how great this deformation is. From this, we can calculate the force acting on the SG. This is how the force transducer works.

In principle, they both seem really similar: the load cell measures mass or weight, the force transducer measures force (i.e. N, or Newtons). Surely they are almost interchangeable? Simply enter 100 grams of weight for each Newton, and you can turn a force transducer into a load cell!

But it's not that simple.

The load cell measures mass, and only ever in one direction, because the mass is always greater than 0. If a container is placed on a load cell, this cannot suddenly lift itself up and produce a negative weight. The force transducer, on the other hand, measures negative and positive forces, tensile and compressive forces.

The load cell is produced then installed somewhere or other at the user's plant, then calibrated on site. Force transducers are calibrated at the factory immediately following production, and must always measure the same, even if removed and installed several times. The force transducer therefore has a more robust construction than most load cells, in order to guarantee the reproducibility of the measured values under varying conditions.

The load cell must satisfy certain legal requirements, regarding legal-for-trade capability, for instance. The force transducer fulfills different regulations – standards, such as VDI 2635 or ISO 376. Unlike the load cell, the above-mentioned reproducibility, for example, is an important factor.

"Force transducers are used virtually everywhere – it's hard to imagine. I was particularly impressed by one test bench usage whereby a force was measured across an air gap. In other words, measurement is taking place even though the force transducer is not touching the platform. I still find it incredible today that this actually works" – Thomas Kleckers

To conclude, we'll take a look at business – a few fields where force transducers are used.