How Does a Strain Gauge-Based Pressure Transducer Actually Work? 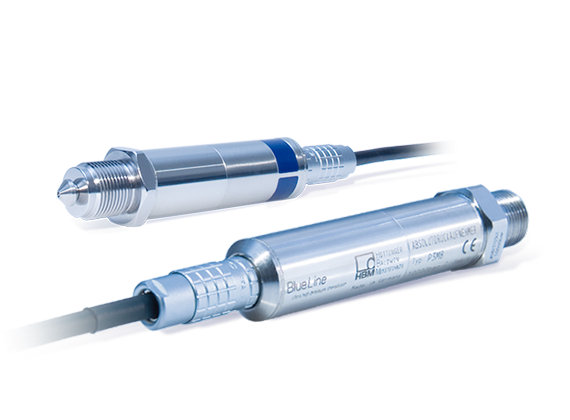 Pressure transducers and pressure sensors often consist of a spring element on which multiple strain gauges are installed. Hence, they work similarly to force transducers. A diaphragm is frequently used as the pressure-sensitive measuring body in the lower pressure range, while the spring element often consists of a single, tubular piece of steel in the high-pressure range.

Process pressure applies a mechanical load to the spring element, which experiences a deformation before returning to its original state. This deformation can be measured by strain gauges (SGs) and analyzed by measurement electronics.

Ideally, the strain gauges are installed in the area of greatest positive and negative strain or stress to obtain the highest possible SG sensitivity. Since the exact strain gradient and strain distribution in the measuring body are known at the pressure transducer's design stage, the shape, position, and length of the measuring grid can be optimized.

Four strain gauges, installed on the measuring body, are connected to a Wheatstone bridge. A measuring amplifier feeds the strain gauges with an excitation voltage and acquires and processes the bridge circuit’s output signal to make the changes in SG resistance visible. The resulting measurement signal can be processed by an industrial measuring amplifier and transmitted to a programmable logic controller (PLC). Alternatively, a high-precision amplifier can be used to visualize the signal directly. Moreover, the measurement chain can be set up using a universal amplifier, which transfers the signal to a software for further analysis and storage. Figure 2 shows examples of these three measurement chains.