Hydrauflush specializes in the maintenance and repair of hydraulic installations and uses HBM test and measurement equipment to process data from a large test bench. 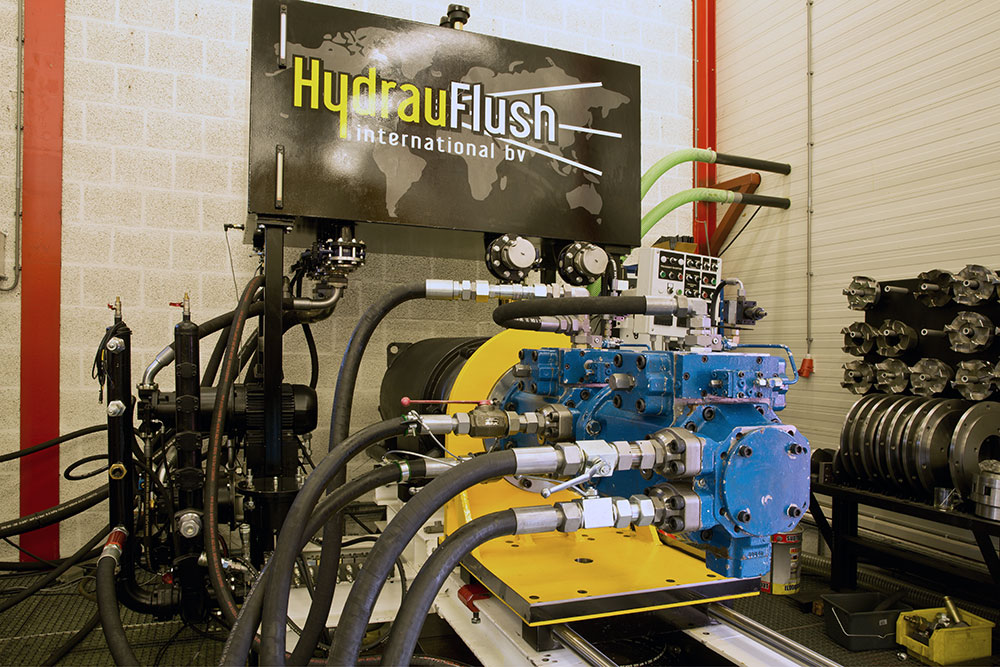 Hydrauflush International B.V. in Wormerveer, Netherlands, specializes in the maintenance and repair of hydraulic installations. Some of the maintenance work is carried out on site, with the overhaul of hydraulic pumps, motors, cylinders and power units being performed in the workshop. Hydrauflush has a 400 kW test bench for motors and pumps up to 1000 cc, one of the largest in the country. Since May 2015, measurement data is being processed using an HBM QuantumX universal measurement amplifier and displayed live, next to the test bench using HBM’s catman®Easy software to give the tester and operator an outstanding and immediate idea of the progress of the tests.

Hydrauflush International was founded in 2008 and specializes in the overhaul and maintenance of hydraulic installations. These are mainly large hydraulic systems on ships, offshore and dredging installations, as well as in cranes, locks and heavy industrial installations. The company has achieved an impressive track record in the overhaul of such systems. Its customers include Allseas, Boskalis, Heerema, Huisman, Rusch Offshore and Van Oord. One project that very much appealed to the imagination in the sector was the complete overhaul of the hydraulic systems on the DEME offshore fall pipe vessel ‘Rollingstone’ in just two and a half weeks. This involved a total of 15 large pumps, motors and other items.

“One of our specialities is flushing hydraulic systems”, says Michel Dijkman, CEO of Hydrauflush. “To do this we have developed a flushing container in house that can be used all over the world. We also have two units that are fitted out as hose containers, with which we can customize hydraulic hoses and pipes on site, pressurize them up to 1790 bar and certify them.” Hydrauflush has also become more active in the industry in recent years, in particular in the maintenance and overhaul of hydraulic systems in factories and recycling installations.

The Hydrauflush staff removes hydraulic systems and takes them to Wormerveer, where they are overhauled in the workshop. Once the pumps, motors, power units, cylinders, manifolds and other hydraulic components have been overhauled, the systems are taken back to the ships, platforms and other installations and reinstalled. Some of the work is carried out in Hydrauflush’s own workshop – in collaboration with other specialists where activities such as applying special offshore coatings are concerned. The Hydrauflush workshop contains a 400 kW electrical test bench for motors and pumps with a swept volume of up to 1000 cc. This is one of the largest test benches for hydraulic installations in the country and is a real USP for Hydrauflush.

A frequency regulator enables the controlled starting of motors and pumps up to 1480 revolutions per minute (rpm). Complete installations for the test set-up can be constructed, including motor, valves, manifolds and cylinders. Systems are not just tested on the test bench, but are also adjusted and certified there in accordance with factory specifications.

Hydrauflush has been using an HBM QuantumX measurement amplifier since 2015. A number of Hydac measuring sensors, certified for offshore use, measure temperature, oil flow, control pressure and oil pressure up to some 630 bar. “We eventually want to perform torque tests on the test bench as well”, says Dijkman. “We fully process all measurement data using HBM’s catman®Easy software. We display them instantly on the screen next to the test bench, so that the tests can be monitored directly. Tests take an average of about three hours. The software visualizes and records the test data. catman automatically generates test reports for both our test records and our customers, which is quite an improvement compared to our traditional approach using Microsoft EXCEL™ sheets we provided before. HBM can also remotely log into the DAQ system to support us if any problems arise.”

“We have the impression that the maintenance of hydraulic systems doesn’t always get the attention it deserves”, says Michel Dijkman, CEO of Hydrauflush. “Hydraulic systems are seen as being very robust. That is true, but it doesn’t mean that maintenance can be ignored. We come across different situations, which depend very much on the application. Maintenance is regarded in some sectors as an irritating additional cost. We have seen hydraulic cranes and installations in some recycling plants and scrap yards that have had no attention for years. If the hydraulic installation leaks, is filthy and the hoses have never been replaced, purchasing a new system makes more sense than overhaul. We also see hydraulic installations – on offshore platforms for example – where maintenance has been carried out meticulously. The maintenance intervals of 10,000 hours of operation have been strictly observed and the hoses have been replaced every seven years. A breakdown in a hydraulic installation entails enormous expense and loss of time, so safety and availability have absolute priority there."

catman DAQ Software
Connect, Measure, Visualize, Analyze: Simplify the acquisition, visualization and analysis of your data with catman - immediately or post process.
QuantumX: Universal and distributable DAQ
The QuantumX data acquisition system (DAQ) is the perfect tool for all of your test and measurement needs. HBM are suppliers of this system.