How Does a Multi-Axis Sensor Work? 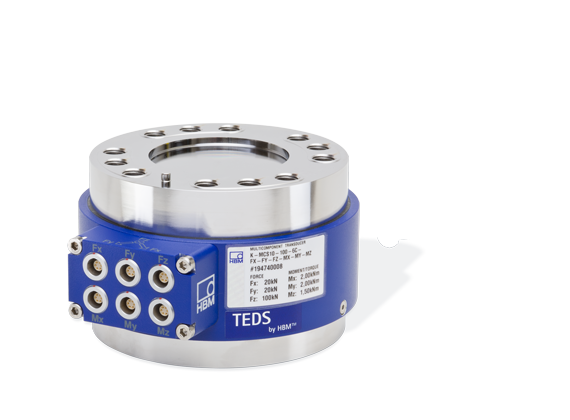 If there is a need to measure forces or torques along multiple vector axes in robotics, for example, the use of force-torque sensors is recommended: These sensors simply save a lot of space and installation work in comparison to installing several single-axis sensors. It is especially important to consider "crosstalk" when selecting the right multi-axis force sensor.

A multi-axis sensor (also called a six axis load cell, F/T-sensor, multi-component sensor or multicomponent transducer) measures forces and torques, which occur in more than one spatial direction, as with measurements in x- and y-direction. Some multicomponent transducers can not only measure forces in the corresponding axial direction but also torques acting on the axis. If torques are being determined along with forces, a multi-axis sensor can thus measure up to six components (3xF, 3xT).

In this way, a single force-torque sensor can perform what is essentially a three-dimensional measurement of physical quantities. This feature makes multi-axis sensors ideally suited for applications that involve determining a multi-dimensional load described in the form of x-, y- and z-vectors. Typical fields of application can be found in robotics and machine monitoring (for example, in aircraft assembly and tunnel boring machines) for limit load monitoring and in various test benches (such as tire testing or balancing machines) for acquiring test specimen data, and also in structural tests of offshore applications.

Crosstalk is a problem that typically occurs in measurement tasks involving multiple loads. If a load is applied in one direction only, in principle, based on the physical result of the Poisson effect, there is also a minimum output signal in the other axes due to the transverse sensitivity of the sensor. However, there are technical possibilities available in this situation to minimize these lateral strain effects (crosstalk). For example, the PMX or QuantumX data acquisition system from HBM can be used to carry out compensation computations individually by means of a "matrix compensation". This compensation can reduce crosstalk by a factor of from 3 to 5. The individual compensation matrix of a multi-axis sensor is a precondition for being able to evaluate the crosstalk and reducing the crosstalk to a minimum using individual measurement technology. It is always important to check carefully regarding transparency and how the sensor manufacturer handles the issue of crosstalk when selecting a six-axis sensor.

Multiaxis Force Sensor MCS10
The MCS10 multi-axis sensor measures up to 6 different forces and torques simultaneously with an accuracy class of up to 0.1.
Webinar: Create and Use Compensation Matrixes
Learn what crosstalk is, how compensation matrixes can be created and how they can be used in HBM's amplifiers and software.
Crosstalk in multicomponent sensors
What causes so-called "crosstalk" effects in multicomponent transducers? Find out about easy compensation methods to ensure precise measurements