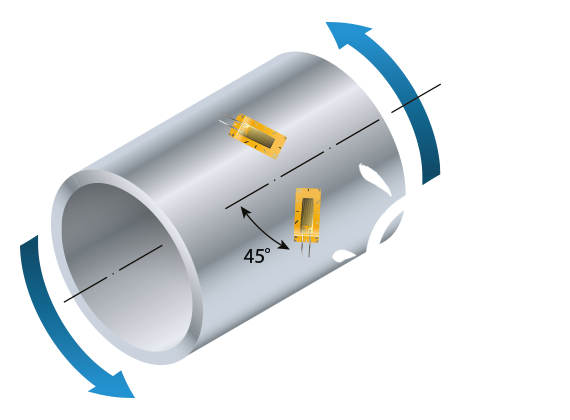 Although torque sensors are available in various designs, they all have a few things in common. To understand how torque transducers work, let’s take a look at the design of the sensors.

Like many other kinds of sensors, torque transducers use strain gauge technology for measurement. The sensor consists of a measuring body, generally of metal, on which strain gauges (SG) are mounted. These consist of a thin foil and an electrical conductor that is firmly connected to the foil. As the foil – and therefore the conductor – changes shape, the electrical resistance also changes. This reveals how much load is currently acting on the SG.

If an external load acts on the sensor, the strain gauge deforms as does the spring element – and measurement can commence. This applies not only to torque transducers, but also to load cells, force sensors, and other types of sensor. However, torque sensors have a few special features.

Unlike load cells or force transducers, the measuring body of a torque transducer is not subject to tension or compression when in use, but to torsion. The sensor is not exposed to a force acting from one or two opposing directions, but rather a lever force, or torque. Therefore, torque sensors are also fitted with special strain gauges that can record this type of load, that is, torsion, very well. Two typical torque transducer designs are the measurement shaft and the measurement flange.

The measurement shaft consists of a shaft, which may also be hollow. The SGs are mounted here – sometimes on a tapered section in the middle, for example, depending on the version. The shaft is enclosed by a housing. The shaft, or rotor, moves while the housing, or stator, is fixed. Both parts are interconnected by low-friction, zero-play bearings. The transducer can be incorporated in a structure or test bench by means of hub-type clamps on both ends of the shaft. These are available in various shapes and sizes.

Measurement flanges basically have a similar structure to measurement shafts, but look completely different. They too consist of a mostly hollow shaft, although this is extremely short. Flanges are situated at both ends of the shaft. These enable the transducer to be integrated into a structure or test bench by means of a threaded connection. Measurement flanges also consist of a rotor and stator. However, unlike in measurement shafts, the rotor is not entirely enclosed in the housing. Therefore, no bearing assembly is needed because the rotor is securely installed in the measurement section.

This is where we see the biggest difference between rotating torque transducers and other sensors such as force transducers or load cells In rotating transducers, cables supplying power and transferring measurement data cannot be used because the cables would become entangled as the rotor turns. To avoid this, energy is transferred from the stator to the turning rotor using a contactless connection, which in turn supplies the mounted SG measuring bridge. In return, the turning rotor transfers the measured data to the stator via telemetry.

Electronics are housed in the measuring body. Here, the signal from the SG measuring bridge is amplified, filtered and digitized before being wirelessly transferred to the stator. The data can then be output either via a frequency or voltage signal or digitally via a fieldbus, for example, with EtherCAT or Profinet, depending on the application.

The transducer doesn’t always rotate when measuring torque. Typical examples of non-rotating setups are standard test machines and measurements on mixers. In the latter, the transducer is supported by the housing of the electric motor, and the drive shaft runs through a central hole in the sensor.

In most applications, the sensor is part of the rotating drivetrain between the test specimen and the dynamometer. The specimen could be an internal combustion engine, a gearbox, or an electric motor, for instance.

Torque can be measured statically or dynamically. An example of a dynamic measurement could be the pulsating torque generated when rotating elements are continually accelerated and then slowed down (or ‘braked’), or through the power stroke of an internal combustion engine. What’s more, dynamic torque can also occur completely without rotation. However, in most applications – such as engine test benches (internal combustion engine or electric motor) – dynamic torque occurs in connection with rotation.

Torque sensors can do more. In addition to torque, other measured variables can be recorded with just one sensor. This is optional, but many torque transducers already come with this ability. The most obvious parameter is rotational speed, which can be measured by transmitting light through a slotted disk on the rotor. As the sensor turns, the beam of light is interrupted at certain intervals. When the time window is constant, the rotational speed is calculated simply by counting the pulses.

One important characteristic of interest to many users is power, which can be calculated by multiplying the torque by the rotational speed.

In addition, many torque transducers have a built-in temperature sensor, which can tell us how much the sensor or drivetrain is heating up, for example.

Torque transducers are ideal for all kinds of engine, motor and drive tests in the field of research and development. Precise torque measurement is indispensable when you want to improve the efficiency of new drives, as it enables friction losses to be determined and minimized. In electric and hybrid motors, what matters is range and improving efficiency; in hybrid and internal combustion engines, the key is always environmental friendliness through the lowest possible CO2 emissions.

Moreover, torque sensors are used in end-of-line tests on transmissions and engines or in function tests on rotary switches. However, some applications look entirely different – such as when liquids are mixed and the process requires monitoring by a torque transducer. Or when torque sensors are installed in the powertrain of a ship. These transducers are also used as reference transducers in standard test machines.

HBK offers both torque measurement shafts and measurement flanges for a large variety of applications.