Foil strain gauges are being used as proven sensor technology worldwide.  Find out what a foil strain gauge is and what types are available on the market. 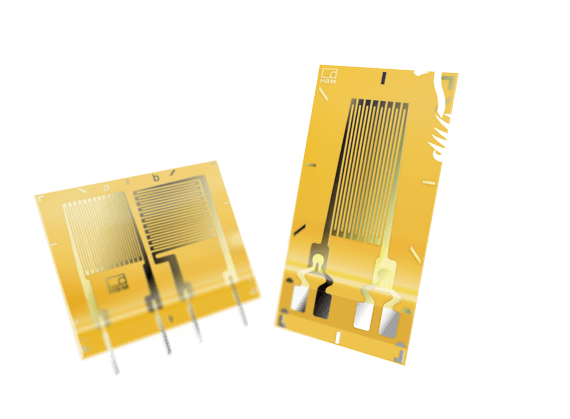 A foil strain gauge is a sensor for measuring relative changes in the length of a material (strain) due to applied forces. This deformation is registered as compression or tension and is greatly influenced by the elastic properties of the tested material. Positive strain refers to instances where mechanical components have elongated while negative strain describes materials that are compressed.

To calculate material stresses (Experimental stress analysis) the strain values are coupled with a material’s physical properties such as its Young’s modulus (Hooke’s law).

Alternate applications for strain gauges are transducers such as load cells, force-, torque- and pressure transducers.

There are thousands of distinct foil strain gauges available from HBM including linear, rosette, torsion/shear, full bridge, and chain formats.

HBM is an expert in the manufacture and supply of leading measurement instrumentation for a broad range of applications. Our foil strain gauges are routinely used for Experimental Stress Analysis, durability testing, and transducer manufacturing, providing unrivalled accuracy in the field of strain analysis.

If you would like any more information about our measurement components for stress analysis, please do not hesitate to contact us.

Y Series: Wide Choice for Standard Applications
The universal series for strain measurements: More than 2,000 different types of strain gauges available for nearly any measurement task.
M Series Strain Gauges for High Alternating Loads
M series strain gauges can withstand temperatures from -200 to +300 °C and up to 10 million load cycles, with a high resistance to alternating loads.
KFU Special Strain Gauges for High Temperatures Up
The strain gauges of the KFU series are proven specialists for applications where high temperatures up to 350°C may occur - even across several days.
C Series (extreme temperature)
The strain gauges of HBM's C series are the low-cost specialists for temperatures up to -269°C, +250°C. They are also particularly flexible.
Transducer Strain Gauges
The optimal combination of performance and cost advantage: HBM strain gauges for manufacturers of transducers.
HBMへのお問合せ HBMやHBMの製品について「もっと詳しく知りたい」、「わからないことがある」、「こんな製品を探している」などございましたら、お気軽に下記お問合せフォームでご連絡ください。
×