Strain is used to describe the measurement of the deformation of a material. The material of a certain component or object can be elongated (tractioned) or contracted (compressed), thus experiencing strain due to the following factors:

Why is Strain Measured?

Most commonly, strain is measured to determine the level of stress on the material – Experimental Stress Analysis. The absolute value and direction of the mechanical stress is determined from the measured strain and known properties of the material (modulus of elasticity and Poisson’s ratio). These calculations are based on Hooke’s Law. In its simplest form, Hooke's Law determines the direct proportionality of the strain ε [m/m] and the stress σ [N/mm2] of a certain material using its elasticity or Young's modulus E [N/mm2].

How is Strain Measured?

To understand how strain can be measured, one must first understand the effects of strain on the material. A specimen without strain has a base length of lo. If strain ε is applied to the object, its length will change by a certain amount Δl as per the relationship given below: 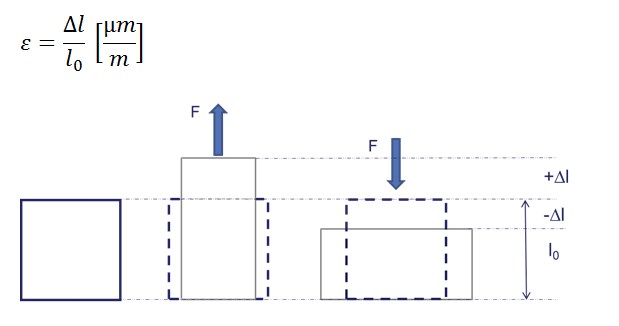 Strain is a non-dimensional value that represents the change of length of a material relative to its initial length. Since the changes of length are usually very small, the standard fractional prefixes of the SI system are used. For strain, micrometer per meter (μm/m = 10-6 m/m = ppm) is generally used.

There are several different types of gauges and sensors that can be used to measure strain. Strain gauges are the most common devices used. HBM offers both electrical strain gauges and optical strain sensors, among other products for strain measurements.

Learn all there is to know about measuring with electrical or optical strain gauges, such as the basics, installation procedures, avoiding failures, and selecting the right strain gauge, by clicking on the headers below.

Both options can be purchased separately or in a combined sensing network.