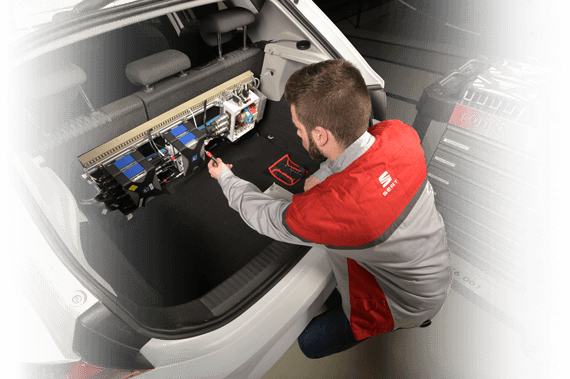 Volkswagen Group specifications require that vehicles are tested during the development phase at SEAT in order to ensure that quality and durability standards are met. The challenge for the SEAT team was to set up a data acquisition (DAQ) system that is fast enough to provide more precise control over the instrumented parts and the entire data acquisition. The team developed an autonomous acquisition, communication and analysis process that meets all requirements – the ADAQ system.

Together with the Polytechnic University of Catalonia, SEAT has developed a system for an Autonomous Data AcQuisition process, also called ADAQ. It is comprised of QuantumX DAQ modules, catman software and an electronic circuit that guarantees both the power supply for all devices and the vehicle-pilot interaction. The following DAQ systems and sensors were used: the QuantumX MX840B universal module, the MX1615B strain gauge module and one CX22B-W datarecorder, thermocouples, accelerometers, strain gauge bridges, displacement sensors, and, in addition, 14 CAN channels and GPS. Due to the wide range of conditions in which the vehicle is likely to be tested, the QuantumX equipment was securely mounted in the vehicle.

The car is shipped to a test track, where the test is carried out. The ADAQ system tranfers data to the headquarters daily, so the analysts can check and analyze the data. The system is started up, when the vehicle is turned on. It performs the following steps:

1. Boot up the catman software

2. Initiate data storage while the vehicle is on the road

3. Stop recording once the car is back at the circuit pit

The system reports irregularities to the analysts to enable them to take further action. The ADAQ is designed to warn the driver when an error occurs.

catman was the software of choice for the ADAQ project, because it provides many different automation options. The setup includes the auto launch of catman, the auto loading of the acquisition project and the automated execution of the first DAQ job. Data files are recorded every 10 minutes. If an unexpected error occurs, the ADAQ system will record up to the moment the error is detected. So no data will be lost. The following filename format is used: XXXYYMMDDHHMMSS, with each letter corresponding to digits for project identification, year, month, day, hour, minute and second. The start and stop acquisition triggers use GPS parameters. This feature that provides greater precision requires three conditions to be specified for starting and stopping acquisition: latitude and longitude coordinates and vehicle speed (greater than 0 to initiate acquisition and equal to 0 when the test is completed).

A control device (CD) has been designed to control the electronics and distribute power to each module. Besides the CD, a voltage rectifier and a driver control box have been installed. Thanks to the electronic circuit implemented and the use of CX22B-W digital outputs, four different statuses have been established in order to notify the driver of the different ADAQ phases. This is made possible by two LEDs installed on the vehicle dashboard.

Permanent red light: Informs the driver that the devices are booting and the project is loading, when the vehicle is switched on. If the red light comes on during acquisition, an error has occurred. The DAQ is stopped, the driver must go to the pit stop and report the problem.

Flashing green light: Informs the driver that data is being acquired and saved. Everything works fine.

Permanent green light: All devices are ready to initiate data acquisition. The project is waiting for the trigger to start recording data. The driver can leave the box area.

Flashing red light: Occurs for different purposes. In this test vehicle it means that damper temperature is too high.

Once the data has been recorded and saved to the CX22B-W memory card, it is uploaded to the SEAT server for subsequent computer analysis. Thanks to programmed commands and a previously configured AdHoc network, the CX22B-W is able to upload the data autonomously to another laptop in the circuit pit. This laptop sends the data to the SEAT servers overnight. A specific application will subsequently perform the analysis on the preselected channels and generate the required report - all totally autonomously.

catman DAQ Software
Connect, Measure, Visualize, Analyze: Simplify the acquisition, visualization and analysis of your data with catman - immediately or post process.
QuantumX: Universal and distributable DAQ
The QuantumX data acquisition system (DAQ) is the perfect tool for all of your test and measurement needs. HBM are suppliers of this system.
Contact us Please send a message and a representative will contact you shortly.