... through the station hall at Holmestrand at a speed of 250 km/h. In order to capture the necessary measurements within the steel ceiling, HBM delivered a solution comprising of 226 strain gauge measuring points. 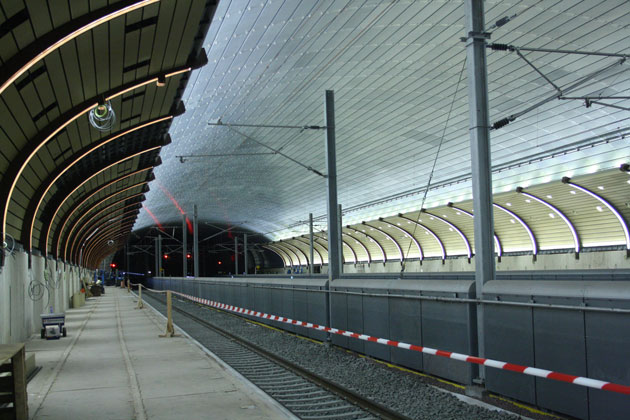 HENT AS is a nationwide total contractor which carries out all kinds of building projects, including a good deal of total contracts, public contracts and special projects within the transport field that require a lot of plants. HENT was already well underway with the development of Holmestrand Station, the world's first station hall of its kind, when the client Bane NOR requested additional verification and monitoring of the steel ceiling above the track to enable the collection of useful documentation over the 100-year lifetime of the steel ceiling. HENT AS sought external assistance to complete the work. Nowhere else in the world has such a railway station hall been constructed, which further emphasized the demand for accuracy, precision and good documentation. Passengers waiting on the platforms need to be spared any discomfort from the pressure generated by trains travelling at such high speed.

HBM Test and Measurement (HBM) was engaged to carry out the necessary measurements using strain gauges mounted on the steel rods that were inserted into the rock to support the steel ceiling, as well as to supply and operate an IT solution — a single server with software.

This was the first time that HENT AS had used HBM as a contractor, but it is full of praise for the work that has been carried out. HBM won the competition to supply the instrumentation for the ceiling above the track. As the steel ceiling is suspended from the rock on embedded rock bolts six metres long - only three metres of which are cemented in place using special hangers - Bane NOR set the toughest demands for accuracy, precision and documentation and requested continuous access to accurate calculations in relation to pressure and suction conditions. The extreme conditions presented by such demanding work, inside a mountain and over a railway track 25 metres above ground, made the process both challenging and time-consuming for HBM. More than 200 strain gauge measuring points were installed on the rock anchors that hold the steel ceiling in place. The objective was to measure the steel rods that support the steel ceiling, because it was being subjected to such dynamic stress. Both HENT and their client Bane NOR are very satisfied with HBM's contribution:

"HBM did an exceptional job. They were efficient, flexible and showed commitment and determination in demanding working conditions. We are particularly pleased that HBM was able to help us out at short notice and, in addition to the installation, was also able to provide expert assistance during testing. This project has been pioneering work for us, so it has been good for us to have a supplier we could rely upon to deliver quality solutions",

The measuring amplifiers used are from the QuantumX series and the sensors are predominantly based on strain gauge technology but also, to some extent, on IEPE (integrated electronic piezoelectric) and piezoresistive technology.

In addition to the 226 strain gauge measuring points, three load cells were also mounted on selected bolts on the steel ceiling in order to monitor the bolt strain over time. Three accelerometers (IEPE sensors) were also installed to enable the monitoring over time of the three-directional movement within the steel ceiling. Other sensors installed include: fifteen movement measuring devices to detect defects and changes in movement in the rock anchors; fifteen pressure/suction sensors (piezoresistive) to monitor pressure and suction on the steel ceiling; and six sound-level meters to monitor the long-term effect of the noise reducing measures.

HBM’s catman software was supplied to make the necessary settings, log data from the sensors and retrieve values from the strain gauges and other sensors, as well as to store all the foregoing. As a result, the data can provide immediate answers to whatever questions the client may have at any given time.

Effective communication and collaboration have given HENT AS the confidence that the correct installations have been carried out and that monitoring will continue. The strain gauges and data logging are essential tools for providing the assurance that safety is being monitored and that equipment is maintaining its utmost quality under all conditions.

HENT can see themselves using HBM in the future: As Nordahl explains,

"It’s not feasible to go into the ceiling to take continuous measurements. As such, Bane NOR is quite clear that it wishes to continue a partnership and enter into a service agreement with HBM to carry out maintenance and calibration, even though we are not completely sure at the moment how often the system should be checked. In addition, we expect to receive marginal values, in advance of alarm signals being sent to Bane NOR, in the event of defects arising in the steel ceiling. This will happen when the installation has been in operation for some time. Bane NOR is still at the very early stages of operation and a project of this kind has never been completed before, but speed tests have already been carried out which involved HBM staff in quality assurance tasks and the retrieval of measured data. Pressure and suction force tests have been carried out on all of the constructions within the station hall.”

HBM NWE Engineering and Services
Our engineers have the knowledge, experience and tools to help you from professional installations to measurement results you can fully trust.
Strain Gauges
HBM strain gauges for all strain measurement applications: Experimental stress analysis, durability testing, monitoring, and transducer manufacturing.
QuantumX MX1615B/MX1616B Strain Gauge Amplifier
The strain gauge amplifier for measuring all mechanical sizes: For all sensors using full-bridge, half-bridge or quarter-bridge configuration.
Structural Health Monitoring
The monitoring of structures helps detect changes to avoid damages and to save money. HBM offers an intelligent and modular solution for every application!
Civil Engineering
ForWhether your applications involve planning of buildings, evaluation of damage or implementation of fatigue tests: viable measurement results count in st