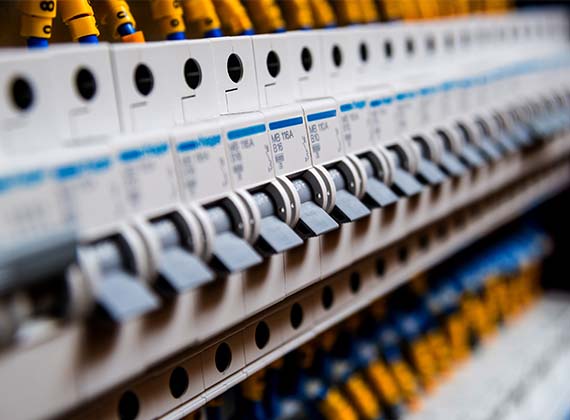 Circuit breakers are ubiquitous wherever there are electrical circuits that need protection against excess current caused by an overload or short circuit. They range in size and capacity from devices the size of a fingernail used for semiconductor protection to devices as large as a truck designed to protect the high voltage circuits that supply power to cities.

A circuit breaker’s function is to provide an automatic way to remove power from a faulty system in order to protect it from damage caused by excess current. When current is flowing normally through the circuit breaker, its contacts must carry the load current without excessive heating. Once a fault is detected, the circuit breaker must open to interrupt the flow of current. When a high current or voltage is interrupted, an arc is generated. Circuit breakers must also withstand the heat produced by the arc.

Given the high voltages and currents associated with high power circuit breakers, research and development activities for these devices have the potential to be extremely hazardous; because they haven’t yet been thoroughly characterized at this stage, circuit breakers that are overstressed can explode and or burn. To limit the possible damage, tests are typically performed in test cells with thick walls and bullet-proof glass; often, the testing location is separated from the test instrumentation by enough distance to protect operators and equipment from flying debris and smoke.

Sensata Technologies is the world’s leading supplier of sensors and controls, serving a broad range of markets and applications. As engineering test manager for Sensata Technologies’ AIRPAX® circuit protectors and circuit breakers line, located in Cambridge, Maryland, Gene Dobbs knows how challenging circuit breaker testing can be. Until relatively recently, he and his staff had relied on several oscilloscope-based test systems that had been in use for more than two decades; Dobbs himself had developed the system’s control software. As system components aged and required repairs, the engineering test team had increasing difficulty in getting help from the original manufacturer. When one of their two systems failed completely and the OEM stopped supporting it, they realized it was past time to invest in new test systems for their hydraulic-magnetic circuit breaker/protector R&D, production test, and UL testing applications.

Sign in to download
Genesis HighSpeed - DAQ for Highest sample rates
The HBM Genesis HighSpeed transient recorder and data acquisition systems (DAQ) are ideal for highest sample rates (from 20 kS/s to 250 MS/s per channel)
High Speed DAQ Software Perception
The Perception software is designed for fast and reliable processing of large amounts of data and is therefore ideal for high-speed data acquisition.