Power analyzers are often used for analyzing and testing electric machines - inverters, motors, generators. They have been the product of choice for carrying out these tests for decades.

However, are power analyzers good enough for your most important tests? Do they deliver enough measurement channels and signals? Can they withstand dynamic testing? If you answer “no” to any of these questions, it's time to trade in your old hand for a new set of cards.

This is the technological breakthrough you have been waiting for, offering:

Assuming you need 12 measurement channels for combined testing of motors and generators. With an 8-channel power analyzer, you need to buy a second mainframe. This can get expensive - bringing with it all associated device synchronization problems.

The number of different signal types that can be measured with conventional power analyzers is very limited. HBM's eDrive testing solution offers more. See for yourself: 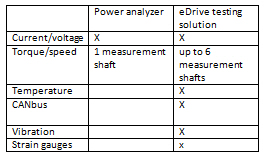 Put an end to being limited by results that sometimes are questionable and cannot be verified. HBM's eDrive solution offers more information: unlimited acquisition and full access to all raw data for convenient verification and analysis. Our patented StatStream[JS1]  technology enables you to review all raw data on your PC within a seconds.

Even with the added performance, your total cost in an eDrive testing system would be the same you would spend on power analyzers. Quite possibly, it could end up being even less if additional mainframes have to be purchased for your power analyzers.

Electrical Machine & Powertrain Testing
HBM eDrive testing consists of two components – the power analyzer and DAQ system which are used to test electrical drives.
Contact us Please send a message and a representative will contact you shortly.